This is my project over the 5 major senses on the body. These 5 senses include sight, smell, sound, taste, and touch. These 5 senses are used in our everyday life and they are very important. In this project, I am going to explain why these 5 senses are so important and hopefully by the end of this, you will understand the importance of them.

So lets start with sight, because without it, we wouldnt be able to see the world and all the beautiful things it has to offer. So with our eyes, we can see all of these wonderful things. But how do they work? Well for starters when you look at something, the light rays that bounce off the object you are looking at enter the eye through the cornea, or the "window" of the eye. The cornea's reflective power bends the light rays in such a way that they pass freely through the pupil. The pupil is the is the opening in the center of the iris through which light enters the eye. The way the iris works is like the shutter in a camera, in the way that is has the ability to enlarge and shrink, depending on the amount of light entering the eye. After passing through the iris, the light rays pass through the eye's natural crystalline lens. This clear, flexible structure works like the lens in a camera, shortening and lengthening its width in order to focus light rays properly. In a normal eye, the light rays come to a sharp focusing point on the retina. It is responsible for capturing all of the light rays, processing them into light impulses through millions of tiny nerve endings, then sending these light impulses through over a million nerve fibers to the optic nerve. There are two types of photoreceptors in the human retina, rods and cones. Rods are responsible for vision at low light levels (scotopic vision). Cones are responsible for vision at higher light levels, are capable for color vision and also responsible for high spatial acuity.

So up next, we are going to talk about the sense of smell. The ability to smell is very impotant because it allows us to know the sent of anything around us. Our nose allows us to smell the best of things, but it also allows us to smell the worst of things. It really is a blessing and a curse. So let me explain how it works. At the top of your nasal passage behind your nose, there is a patch of special neurons. These neurons are unique as they are out in the open where they can come in contact with the air. They have hair like projections called cilia that increase their surface area. An odor molecule binds to these cilia to trigger the neurons and allow you to preceive a smell. Each of the hundreds of receptors are encoded by a specific gene. If your DNA is missing a gene or if the gene is damaged, it can cause you to be unable to detect a certain smell. For example, some people have no sense for the smell of camphor. The sinuses are lined with soft, pink tissue called mucosa. Normally, the sinuses are empty except for a thin layer of mucus. The inside of the nose has ridges called turbinates. Normally these structures help humidify and filter air. The olfactory bulb is a special organ that is located in forebrain of all vertebrates and accepts neural inputs related to odor which is identified by the nasal cavity cells. The olfactory bulb processes the information after its transduction into the epithelium of the nasal organs by receptor. 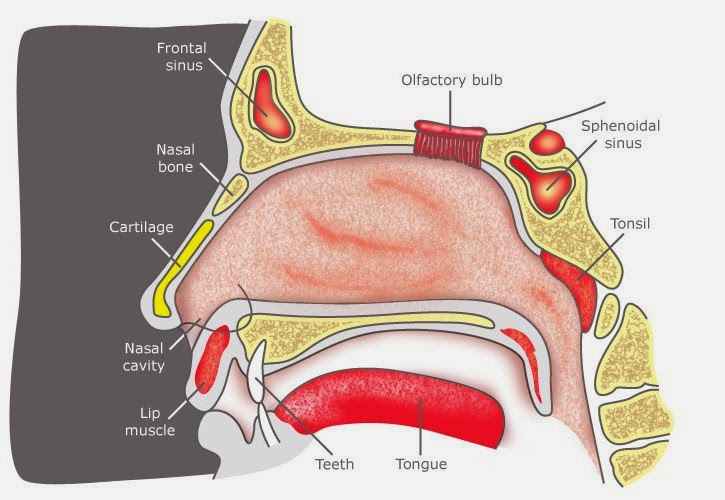 Up next, wee are going to talk about how our ears work, which allow us to hea the many sounds around us such as someone talking to you, the horn on a car, or your favorite song. There are many parts of the ear that allow it to work the way it does. The first part that we are going over is called the ex auditory meatus, which is basically just the passageway from the outside of the head to the eardrum. The eardrum, or the tympanic membrane, is the part of the ear where when sound waves reach it, they cause the eardrum to vibrate. When the eardrum vibrates, it moves the tiny ossicles — from the hammer to the anvil and then to the stirrup. These bones help sound move along on its journey into the inner ear. The malleus is one of three ossicles in the middle ear which transmit sound from the tympanic membrane to the inner ear. The incus receives vibrations from the malleus, to which it is connected laterally, and transmits these to the stapes. The stapes is a stirrup-shaped bone in the middle ear. The stapes transmits sound vibrations from the incus to the inner ear. The stapes is the smallest bone in the body. The cochlea, the auditory inner ear, transforms the sound in neural message. The function of the cochlea is to transform the vibrations of the cochlear liquids and associated structures into a neural signal. The basilar membrane, which is within the cochlea of the inner ear, is a stiff structural element that separates two liquid-filled tubes that run along the coil of the cochlea, the scala media and the scala tympani. The largest organ of the body is the skin, and with the help of many many nerve endings and touvh receptors, it is the primary organ of the sense of touch. The main things that we feel things with if out hands and our feet. There are a few main parts that make uo the skin, such as hair follicles. Hair Follicles have touch receptors known as hair follicle receptors. These receptors form sensory nerve fibers that wrap around each hair bulb. Bending the hair stimulates the nerve endings. There is also the mechanoreceptors, which are receptors in the skin and on other organs that detect sensations of touch. These get their name because they are designed to detect mechanical sensations. Up next, we got the nociceptors are sensory receptors that detect signals from damaged tissue or the threat of damage and indirectly also respond to chemicals released from the damaged tissue. Next, we got the thermoreceptors. These are specialized nerve cells that are able to detect differences in temperature. Temperature is a relative measure of heat present in the environment. And finally, we got papillary muscles, which serve to shut the heart valves tightly and prevent prolapsing of the valve leaflets when the heart beats, keeping blood from flowing back into the atrial chambers. The papillary muscles start to contract just before the ventricles contract, to prepare the valves for high ventricular pressure.